I spent my summer vacation doing biomedical research with the experts at the National Institutes of Health (NIH). As a senior biology major, this internship was an amazing experience. Not only was I doing original research, but I also had the opportunity to listen to talks from scientists in various fields and learn from many brilliant individuals at different points in their careers. Being surrounded by these talented scientists was inspiring, and their advice has helped me to evaluate my goals and to take steps to make them a reality.

So how did I get here? How did I land this competitive internship and make these incredible connections? One word: Franciscan.

Going into my senior year of high school, I had a plan, and Franciscan was not part of it. Sure, I applied to the University, but I had no intention of actually coming here. Then, I was invited to campus for the Scanlan Scholarship Competition and decided to see what the all hype was about.

I met other prospective freshmen and explored the campus. By the end of the weekend, I had gotten a taste of the students Franciscan attracts, and nothing else compared. The experience made me realize Franciscan was the only school for me. I may not have won the scholarship, but that weekend, Franciscan won me.

Ironically enough, the merits of Franciscan’s biology department (which are many) played a very minor role in my decision to attend, but the genuineness and goodness that I had admired in Franciscan students is also characteristic of the professors, as I was soon to discover.

I arrived as a freshman biology major vaguely interested in going into this thing called research. I spent my first year settling in; I made friends and learned the Franciscan lingo. When the time came to apply for summer jobs, I decided to aim for the stars. I applied for an internship at the National Institutes of Health through the Franciscan Institute for Science and Health (FISH) partnership program.

I didn’t get the internship. What I did get was an email from Dr. Rohde, chemistry professor and co-director of FISH, asking to schedule a follow up meeting. This professor cared enough to set up a meeting with a freshman he had never met, talk to me about my application, and suggest some concrete steps I could take to be a stronger applicant next year! At the time, it was completely unexpected, but now I can see that it was just one example of how he and other professors at Franciscan are invested in the success of their students.

During my sophomore year, I began doing regenerative medicine research on campus with Dr. Dan Kuebler. Getting into a lab so early in my college career was an incredible opportunity. I became familiar with basic lab techniques and protocols, and, with a year of research under my belt, I applied to the NIH/FISH program once again. This time, I was accepted!

Going into my summer internship, I was very grateful to have previous research experience. Although it definitely took time to settle into the new lab, my basic understanding of some of the techniques and protocols used in research gave me a head start, and the summer was a fantastic experience. I became a published author on a scientific paper, and I was invited back for another internship.

My junior year flew by, followed by a second summer at NIH, and somehow this is my last semester at Franciscan. After graduation, I plan to go to graduate school for a PhD in either the biomedical or pharmaceutical sciences. My overarching academic goals have remained the same throughout my college career, and Franciscan has equipped me with the knowledge and the skills necessary to make those dreams a reality. 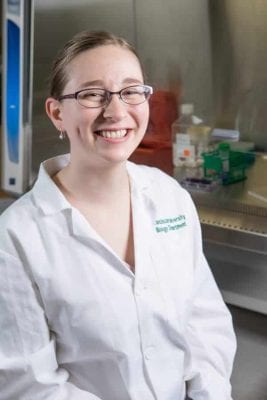 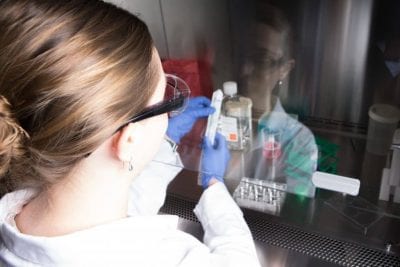 I spent my summer vacation doing biomedical research with the experts at the National Institutes of Health (NIH). As a…