Growing up as an Air Force “brat,” moving around every couple of years and living on different military bases around the world was a part of my everyday life. Perhaps unsurprisingly, it’s the lifestyle I also pictured for myself. However, I also wanted to attend Franciscan University. Thankfully, I’m able to do both thanks to Air Force Reserve Officer Training Corps (AFROTC) at the University of Pittsburgh—just 40 miles from campus.

AFROTC has enabled me to pursue a bachelor’s degree at my dream college, as well as fulfill my dream of following in my parents’ footsteps by joining the United States Air Force. There are obvious financial and career benefits for joining AFROTC, but the best part of AFROTC is that it allows me to be a part of something bigger than myself.

The program also pushes me to live my values. The Air Force core values (integrity first, service before self, and excellence in all we do) are hallmarks in my detachment and are shared by all the cadets.There’s definitely a sense of pride in knowing that our future jobs in the Air Force will allow us to give back to our country as members of the armed forces, as opposed to living only for ourselves with any other desk job.

Of course, part of my life as a cadet is to be a student something that would not have been possible without an AFROTC scholarship. To be blunt, if it had not been for AFROTC, I would not have been able to stay at Franciscan University. During my freshman year in the program I was nominated for a scholarship as part of AFROTC’s In-College Scholarship Program. I received an incredible scholarship offer, which pays for a significant portion of my tuition and provides me with a monthly stipend. My scholarship and stipend have allowed me to significantly reduce my future debt as well as pay for the commute to the University of Pittsburgh. However, scholarships are not handed to you. Earning one takes hard work and dedication; values I’ve been able to cultivate as a cadet.

Though we don’t train for our specific Air Force career during the AFROTC program, we do train for our future as an Air Force officer and leader. From the first year of AFROTC to the day we commission, we’re expected to develop, gain, and apply vital leadership skills to different scenarios. AFROTC is challenging – many of the individuals that joined with me three years ago are no longer part of the program. But the goal is achievable for those willing to put in the time and effort. I have learned so many vital leadership skills during my AFROTC experience. These skills include keeping my bearing under pressure, adjusting quickly to change, delegating assignments to other cadets, showing confidence, paying attention to detail, leading a large group of individuals (as many as 200 cadets, depending on the size of the detachment), meeting several deadlines at once, prioritizing my time, being prepared, stepping up to challenging leadership positions, and many more. All of these have benefitted me and molded me into the leader I am today.

These skills helped me in the summer training program known as Leadership Evaluation and Development, or LEAD. During LEAD (taken after the end of my sophomore year) I was tested mentally as well as physically. It was a challenging process, but completely worth it through hard work, determination, time management, and focus, all of which are greatly emphasized in the program. Along with the skills I’ve developed, knowing that I will eventually have a career in the Air Force after I graduate college provides me with a sense of security, confidence, direction, and enthusiasm that many graduating seniors do not have, creating the drive to be the best AFROTC leader I can be.

Overall, the AFROTC program has provided me with financial and career benefits, great leadership opportunities, and the camaraderie of reliable wingmen who have my back. Cadets also wear the uniform, which is one of my favorite aspects of AFROTC. The honor of wearing the same Service Dress and Airmen Battle Uniform as those Americans who have served before me is something that I do not take lightly. It gives me a great deal of pride for my country and also humility because it is seriously a privilege to wear it. The challenges of early morning workouts, high standards, and the pressure of performing to the level of military excellence are the most rewarding things I have done so far in my college career and are well worth it. I have grown significantly as a person and cadet since my first year. I encourage any prospective student at Franciscan University who desires to serve their country in the future and enhance their college experience to become a part of something bigger than themselves by joining the AFROTC program. You won’t just develop skills that will last a lifetime, but you’ll get to serve our nation in the greatest Air Force in the world!

Interested in becoming a cadet? Find out how you can attend Franciscan University while training for an exciting Air Force career at our ROTC webpage 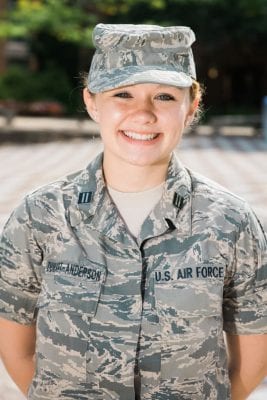 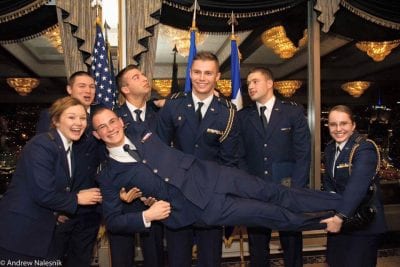 Ready to Launch: AFROTC at Franciscan

Growing up as an Air Force “brat,” moving around every couple of years and living on different military bases around…