Since the 1990s, the details of campus life at Franciscan University have unquestionably changed. The essentials, however, (and even some of the professors) have remained very much the same. That’s the lesson dozens of alumni from the late 1980s and 1990s have learned in recent years, as they’ve sent their children to Steubenville for their own Franciscan experience.

Today, the student body at Franciscan University is increasingly made up of Legacy Students—children of one or more Franciscan alumni. For any university, that’s a good thing; there is no higher form of praise for your alma mater than entrusting it with your own children. For Franciscan—a small university with a specific mission and vision—it’s a very good thing. It means what we strive to do—form joyful missionary disciples who can live as salt and light in the culture—is working; the parent alums’ desire to give their children what they received at Franciscan is a testimony to that.

Recently, Franciscan Magazine talked with just a few of those alumni and their children about their experiences on campus, then and now, as well as how the parents’ time at Franciscan (and stories about that time), shaped their children’s decision to follow in their footsteps.

Here, at a glance, is what we learned.

Explore Other Blogs
Then

Discovered Franciscan . . . “I went to summer conferences at Franciscan in the ’80s and got on their mailing list. I remember getting a St. Francis holy card with a note saying they were praying for me to go to college wherever God wanted me to go. At the time, I had never thought about God wanting me at one place versus another, so I thought I would try Franciscan for a year. I ended up staying.”

Favorite date destination . . . “Anything in Pittsburgh or the cemetery on the hill in West Virginia, overlooking the river.”

Wore . . . “It was all bad. Boy Levi jeans, baggy elastic pants, and too high waist everything!”

What’s stayed the same . . . “The faith and energy of the students walking around campus.”

I’m grateful for Franciscan because . . . “It taught me that God’s world is so much bigger than mine! While things may not always go as I prefer in my little corner, I only need to look up at him, see his grandeur, and ask him what he wants of me. Then, suddenly, everything is good and perfectly as it should be.” 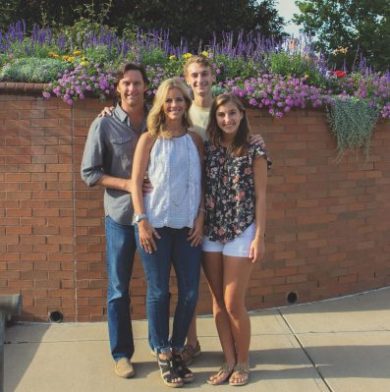 Toughest professor . . . “Any of the sophomore biology teachers.”

Listening to . . . Of Monsters and Men, Dear Other.

Parents’ most frequently told Franciscan stories . . . “Dad had way more stories—mostly pranks his friends pulled—but one of the best ones is my dad’s awkward first date with my mom when he was a freshman and she was a fifth-year senior.”

Franciscan stories I might tell my kids someday . . . “Luckily, I haven’t done anything too stupid yet, but I had a lot of fun on the first big snow day of the year making makeshift sleds and a couple of the guys rolling down in a tractor tire flailing their arms out the side.” 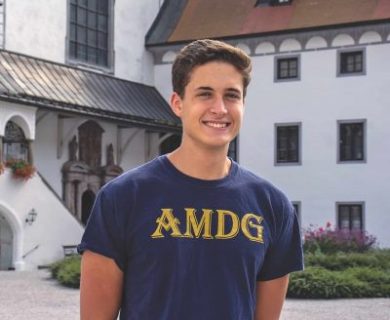 Legacy Pressure . . . “Not at all!! This was my number one school choice. I only applied to Franciscan!”

Favorite professor . . . “Dr. Logan Gage. He is very smart but also keeps his class engaged and has great lectures.”

Favorite off-campus hangout . . . “The Top of the World.”

Most popular date destination . . . “The Top of the World” and the Weirton bowling alley.

Parents’ most frequently told Franciscan stories . . . “How my dad met my mom at the coffee shop he owned in downtown Steubenville.”

Plans for the future . . . “To work for the federal government in some capacity, like my dad.”

Discovered Franciscan . . . “Through my former NET member, Tim Scanlan ’89, who encouraged me to apply. He had just seen an application by a different Joe Wright, and thought it was me, so he called me to tell me he saw my application. I told him it wasn’t me . . . and then I applied. (Joe) “I was directed by my parents.” (Brooke)

Majored in . . . Mental Health and Human Services (Joe and Brooke).

The best thing we received from our time at Franciscan was . . . “Lifelong Catholic friendships.”

Discovered Franciscan . . . “By the grace of God.” (Ched); “My sister went there, and I swore I would not go. But I visited her at a Come and See Weekend and was sold.” (Nanette)

Favorite off-campus hangout . . . “The Twilight, the Fed, the Bulldog, my apartment on Ridge.” (Ched); “The Bulldog, Overstreet, or Drover’s” (Nanette).

We’re grateful for Franciscan because . . . “I met my bride there. We have six children and were married 20 years ago in August. We have gone through a lot, but we  continue to place our trust in Jesus and offer gratitude daily for all that we have been given in this beautiful sacrament. We also have wonderful support from fellow Franciscan grads.” (Ched); “It’s where I met the love of my life, my husband. It’s where I surrendered completely to God’s merciful love. It’s where I was formed in virtue and love to be the wife and mother I am today. It’s where I received the graces and strength I would need to raise a beautiful daughter born with spina bifida.” (Nanette) 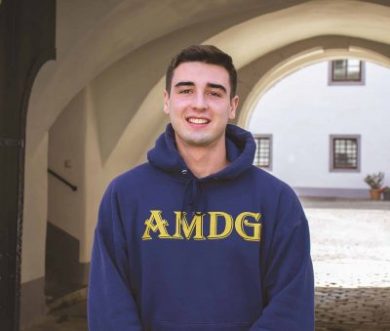 Legacy Pressure . . . “A little from my parents who really wanted it for me. But ultimately it was my decision.”

Most popular date destination . . . “Top of the World.”

Parents’ most frequently told Franciscan stories . . . “How my parents met at FUS and fell in love. Also, how my mom fell through the kitchen floor at their engagement party.”

Franciscan stories I might tell my kids someday . . . “The time I walked into a concrete hanging flower pot and got a mild concussion.”

Plans for the future . . . “I’m not 100 percent sure, but maybe work in the field of psychology (or social work) counseling teens struggling with drug and alcohol addictions.” 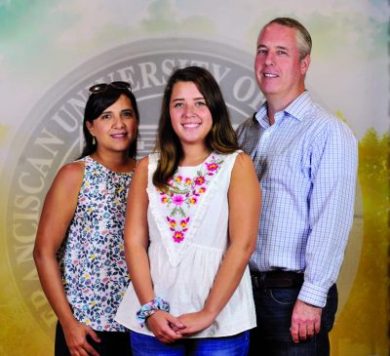 Legacy Pressure . . . “A little bit from my parents considering it was the college both of them went to.”

Most popular date destination . . . “On campus: one of the available common rooms. Off campus: Robinson, any of the local restaurants, or bowling.”

Favorite “Caf” food . . . “Definitely the cheesecake! Or the bread bowls.”

Parents’ most frequently told Franciscan stories . . .  “My uncle once filled the back of his truck with water and dumped random people on campus in there, saying they were being baptized.”

Franciscan stories I might tell my kids someday . . . “One time about 12 of my friends and I accidentally locked all of our belongings, including our shoes, in one of the classrooms late at night in SS. Cosmas and Damian. Our phones and student IDs were in there so we couldn’t leave and go back to our dorms. Unfortunately, there was also an emergency on campus that day, and all of the security officers were busy with the ambulance or paperwork. We all had three exams back to back the next day, and all of our books were locked in the room as well. We spent five hours in SS. Cosmas and Damian (until about 1:00 a.m.) waiting for our books and belongings, then we went to bed. We all did pretty well on the exams, though, despite the inability to study that night.”

Plans for the future . . . Medical school.

Discovered Franciscan. . . “My family moved to Steubenville when I was 9 years old. My father was a business professor at Franciscan (then the College of Steubenville). I was never really given a choice of where I was going to school.”

Favorite professor . . . “I really enjoyed many of the professors, but if I have to pick one— Dr. Jim Harold.”

Toughest professor . . . “Dr. Winifred Dickinson, without a doubt.  She was brilliant and a force to be reckoned with.”

Household . . . “I was part of Mustard Seed Household, which collapsed my freshman year.  I then joined Lion of Judah.”

Favorite date destination . . . “Milk and cookies in the pub after distracting my girlfriend (now my wife, Ana) away from the library.”

Favorite off-campus hangout . . . “Irvstock. The Irvin family had a water-filled quarry 30 minutes west of Steubenville. Warm weather, friends with guitars and musical abilities, and a cliff to jump from.”

What’s changed . . . “The students look so young, but I was once like them. In a real way, I see the current generation as less connected to the world around them. Many are constantly plugged into the electronic world and missing the reality around them.”

I’m grateful for Franciscan because . . . “It brought Ana and me together, first as students, eventually as husband and wife. It shaped me academically to prepare me for medical school; I felt like I had a leg up on many of my classmates in medical school because of the professors I had as an undergraduate student. More importantly, it enriched my faith, and it gave me words to understand and communicate my beliefs.”

Discovered Franciscan . . . “Through the high school youth conferences.” (Edward) “Through the charismatic renewal and my older brother.” (Lisa)

What’s stayed the same . . . “Christ the King Chapel, the Port, the TORs, and Household Life.”

We’re grateful for Franciscan because . . . “It had a huge influence on my faith formation, plus it prepared me for dealing with people in my professional life.” (Edward). 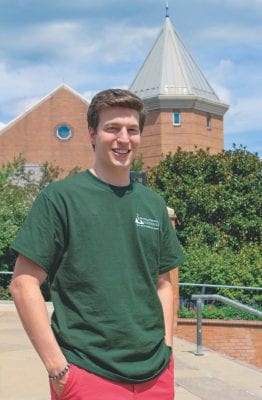 Parents’ most frequently told Franciscan stories . . . “How they met each other and got married.”

Franciscan stories I might tell my kids someday . . . “Our time studying in Europe was amazing, so definitely that. Also, we played lacrosse during its first season ever at Franciscan. That was pretty great, too.”