If cross-country success at Franciscan University of Steubenville has a name, it’s Galligan. You could say that the genes run in the family, with Grace and Liam Galligan earning a multitude of accolades, from 2018 AMCC Runners of the Year, to Liam’s two-year winning streak at the AMCC cross-country championships, to trips to nationals.

Though they didn’t get many chances to run together on a team growing up, the fiercely competitive Grace and Liam have the same goal of success, not to mention a sibling rivalry to rival the best of them.

Both Galligans have been running competitively since they were 5 years old, starting at their home parish of St. Francis of Assisi in the Archdiocese of Philadelphia CYO Program.

Because they’re three years apart in age, they only had the chance to be on the same team for two non-consecutive years before college. Their training styles also differ, with Liam preferring to run at dawn while Grace runs in the evening.

It wasn’t until Grace’s second year at Franciscan, after she transferred from the University of the Arts in Philadelphia and spent one year of serving with NET ministries, that the two had a chance to run together. From his freshmen year, Liam’s goal was to create a culture of success at Franciscan.

“I had always dreamed of building a strong cross-country program, and Franciscan had all the tools necessary to start this process,” said Liam. “The athletes, the faith, the training that we have are things that we can use to make a contending program.” 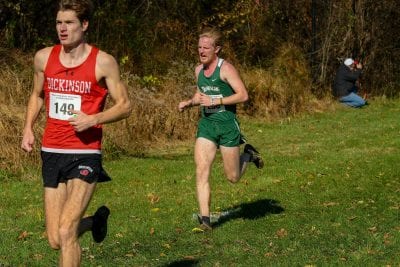 What he got, in the process, was two years running with his No. 1 supporter.

“I’ve always prided myself on being self-dependent when it comes to achieving my personal goals,” said Liam. “Being able to push myself in running motivates me to do better in a lot of things in life, especially academics and my faith life. That’s the same intensity. Running helps me push myself because I know I can demand more of myself when I’m training.”

Still, it helps to have a little help from his teammates–and his sister.

Grace, who is team captain of the women’s cross-country team, said her drive for success helps her to understand and push others to the same. “When you push yourself, you allow others to see that they have that capability inside of them as well. If you’re not pushing yourself, you can’t push the team.”

She extends this energy to being the voice in the crowd for Liam at meets. Their family can’t always come to races, but Grace said the siblings share a similar “pre-race headspace.”

“It’s like he knows what I’m thinking because he would be thinking the same thing,” she said. “Our dad gets really intense when he cheers, and Liam needs that when he races. Other people on the team are afraid to do that, but I’m like, ‘I’ve been doing this my whole life.’ I’ll scream as loud as you need me to.”

The two siblings serve as a mutual support system for each other whether in practice or at a meet. Liam said he checks in to make sure Grace got her run in and that she’s feeling well, adding, “We’ve both gone through some serious injuries in our careers.”

“It’s a gift that we can run on the same team here,” said Grace. “It’s different; he’s not like a regular teammate. There’s this camaraderie that is really special, and I have to remind myself: once I graduate, I’ll never be on the same team as him. It is a really big gift that I don’t think a lot of other athletes get.”

“Having these two years with her is just amazing,” said Liam.

There’s some friendly competition between the two, according to Liam, but it’s more of an accountability standard. Grace shared that the only rivalry or competition is “the energy I extend in preventing Liam from growing his hair out too long so that he doesn’t look like me.”

“Last year, people on campus would mix us up when they saw us from the back because his hair was so long,” she said with a laugh.

Both agreed that running has formed them as individuals, helping them become more well-rounded adults.

“I personally have come to a deeper understanding of myself and the world around me through the sport of running,” said Grace. “There really aren’t many things in life that push you to the limits like running does. Running brings you face to face with your doubts, fears, anxieties and sufferings.”

It also brings them face to face with excellence. During nationals, Liam finished with the highest time ever record by a Franciscan University runner, capping off a season where he captured his second-straight AMCC individual title, led the Barons to their first team title since 2010, was named AMCC Runner of the Year for the second-straight year and earned Mideast All-Regions honors for the second straight season. Not to be outdone, Grace captured 24th overall in a very competitive NCAA DIII National Championship meet, and earned the first All-America honors for the women’s program. It was a fitting end to a career in which she won two individual AMCC titles (2016, 2018), led the Lady Barons to a team title (2018), was named AMCC Runner of the Year (2018), was named AMCC Newcomer of the Year (2016), and earned two Mideast All-Region honors (2017, 2018). 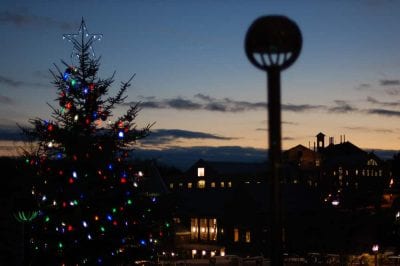 Finding the Reality in Christmas

My family has the unique claim of being the March family from Little Women. That, or the closest thing to…

Genes Run in the Family

Liam and Grace Galligan Propel Franciscan to New Records If cross-country success at Franciscan University of Steubenville has a name,…

Finding the Reality in Christmas
November 29, 2018