There’s this notion (I’m not sure how widely it is held, but it exists) that those in the counseling field are in the field initially to learn how to fix themselves, or those in their environment, or perhaps both. And really, I don’t imagine that is too far off the mark, considering the amount of introspection it takes to be able to reach into someone’s world, pull out the themes and major characters of their life and give it back to them in a new, healthy perspective that evokes positive change–all while being able to model that kind of lifestyle in a way that convinces the client it is possible.

An example to consider, and one, I admit, is still food for thought about my own growth as a person and therapist, is an experience I had with a client of mine just a week ago in a counseling session with him. A man in his forties, he presented with his usual feelings of grief, worry, anxiety–pretty much every emotion, come to think of it–concerning his relationship with his significant other, his mother, and ultimately himself. In the past few sessions, he spent much of the time talking about his experiences and anxieties of the last week and resisting the clear urge to burst into tears. This session, however, he had much less to say, and had reportedly resorted to dealing with his problems by asserting himself in, let’s say, less than considerate ways to those around him, excluding me. (I was his therapist, after all!)

In my 23 years of life, there have been a few experiences which gave me insight to his feelings, and so I was able to relate to him, and found that I was able to ask what seemed to be therapeutic questions which helped him evaluate his emotions.

After a little bit of therapeutic silence, I asked the question, “So, if these people who are making you feel this way could say one thing that would alleviate this mixed bag of feelings you have for them, what would it have to be?”

In this moment, I realized something both frightening and enlightening at the same time: I had no clue where to go next.

Why couldn’t I figure out where to go with his answer?

The next moment, during which I used therapeutic silence to stall as much as I could, I realized that, in those experiences that allowed me to relate to his feelings, I myself had never moved past that question either. In a manner of speaking, my client had just brought me to terms with where I was in my own emotional growth–and my gosh was it uncomfortable. I finished the session by allowing him to consider never receiving that apology, and what that would mean to him, which was in fact more of a question for myself than for him.

Hopefully I’ve made my point. Counseling is a field in which everyone involved is at risk for personal challenge and a call to growth.

To kick it up a notch, the field of Pastoral Counseling, (to answer the unknown question posed in this blog, if you will) allows for another avenue for that personal growth, enabling the questions both known and unknown to be answered by the being who created us with the desire to seek answers to them, and ultimately discover Him in the process. With the option of seeking healing in a faith based setting such as a parish allows both the client and counseling to broaden their views of the world and themselves through the discovery of faith and the Creator of the world they live in. 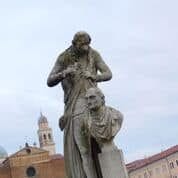